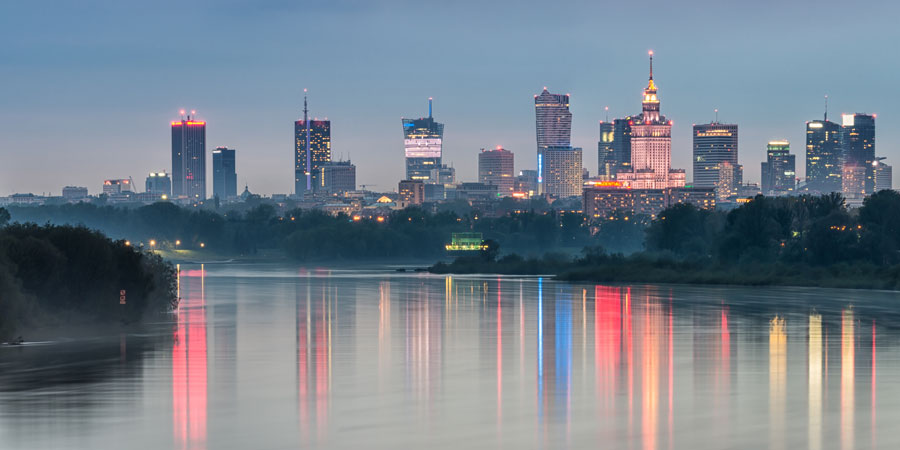 Warsaw – the capital of Poland (Polish: Warszawa) is the capital and largest city of Poland. It stands on the Vistula River in east-central Poland, roughly 260 kilometres (160 mi) from the Baltic Sea and 300 kilometres (190 mi) from the Carpathian Mountains. Its population is estimated at 1.740 million residents within a greater metropolitan area of 2.666 million residents, which makes Warsaw the 9th most-populous capital city in the European Union.

Warsaw – the capital of Poland (Polish: Warszawa) is the capital and largest city of Poland. It stands on the Vistula River in east-central Poland, roughly 260 kilometres (160 mi) from the Baltic Sea and 300 kilometres (190 mi) from the Carpathian Mountains. Its population is estimated at 1.740 million residents within a greater metropolitan area of 2.666 million residents, which makes Warsaw the 9th most-populous capital city in the European Union. The city limits cover 516.9 square kilometres (199.6 sq mi), while the metropolitan area covers 6,100.43 square kilometres (2,355.39 sq mi). In 2012 the Economist Intelligence Unit ranked Warsaw as the 32nd most liveable city in the world. It was also ranked as one of the most liveable cities in Central Europe. Today Warsaw is considered an "Alpha–" global city, a major international tourist destination and a significant cultural, political and economic hub.

Krakow – the second largest city of Poland and the country's ancient capital is sometimes spelled as Cracow in English although its correct English name is Krakow nowadays. Krakow is the top tourist destination of Poland. The city basks in glory of its long history and it greatly treasures its reputation of the culture capital of Poland. Cracow's seven universities plus almost twenty other institutions of higher education make it the country’s leading center of science and education. The city's expanding service sector is the lifeblood of local economy but varied industry and production still provide substantial proportions of jobs and wealth. Cracow is the metropolis of southern Poland and the capital city of the Malopolska Province.

Lodz - the third-largest city in Poland. Located in the central part of the country, it had a population of 715,360 in 2013. It is the capital of Łódź Voivodeship, and is approximately 135 kilometres (84 mi) south-west of Warsaw. The city's coat of arms is an example of canting: depicting a boat. It alludes to the city's name which translates literally as "boat." Łódź is a thriving center of academic life. Currently Łódź hosts three major state-owned universities, six higher education establishments operating for more than a half of the century, and a number of smaller schools of higher education. The Piotrkowska Street, which remains the high-street and main tourist attraction in the city, runs north to south for a little over five kilometres (3.1 miles). This makes it one of the longest commercial streets in the world.

Gdansk - is a Polish city on the Baltic coast, the capital of the Pomeranian Voivodeship, Poland's principal seaport and the centre of the country's fourth-largest metropolitan area.The city lies on the southern edge of Gdańsk Bay (of the Baltic Sea), in a conurbation with the city of Gdynia, spa town of Sopot, and suburban communities, which together form a metropolitan area called the Tricity (Trójmiasto), with a population approaching 1.4 million. Gdańsk itself has a population of 460,427 (December 2012), making it the largest city in the Pomerania region of Northern Poland. There are 14 higher schools including 3 universities. The city has some buildings surviving from the time of the Hanseatic League. Most tourist attractions are located along or near Ulica Długa (Long Street) and Długi Targ (Long Market), a pedestrian thoroughfare surrounded by buildings reconstructed in historical (primarily during the 17th century) style and flanked at both ends by elaborate city gates. This part of the city is sometimes referred to as the Royal Road, since it was once the former path of processions for visiting kings.

Poznan - is a city on the Warta river in west-central Poland, in the Greater Poland region. It is best known for its renaissance old town, destroyed during World War II and then rebuilt, and Ostrów Tumski cathedral. Today, Poznań is an important cultural and business centre and one of Poland's most populous regions with many regional customs such as Jarmark Świętojański, traditional Saint Martin's croissants and a local dialect. Poznań is among the oldest cities in Poland and was one of the most important centers in the early Polish state in the tenth and eleventh centuries. Poznań is one of the four largest academic centers in Poland. The number of students in the city of Poznań is about 140 000 (fourth/third after Warsaw, Cracow and close to Wrocław student population). Every one of four inhabitants in Poznań is a student. Since Poznań is smaller than Warsaw or Cracow still having a very large number of students it makes the city even more vibrant and dense "academic hub" than both former and current capitals of Poland. The city has many state-owned universities.

Wroclaw - is the largest city in western Poland. It is on the River Oder in the Silesian Lowlands of Central Europe. Wrocław is the historical capital of Silesia and Lower Silesia. Today, it is the capital of the Lower Silesian Voivodeship. At various times in history, it has been part of the Kingdom of Poland, Bohemia, Hungary, the Austrian Empire, Prussia, and Germany. It became part of Poland in 1945, as a result of the border changes after the Second World War. The population of Wrocław in 2015 was 635 759, making it the fourth-largest city in Poland and the main city of Wrocław agglomeration. Wroclaw is classified as a global city by GaWC, with the ranking of high sufficiency and living standard. It was among 230 cities in the world in the ranking of the consulting company Mercer — "Best City to Live" in 2015 and the only Polish city in this ranking has been recognized as a city growing at the business center