There are 65 793 foreign students from 166 countries studying in Poland, over 8,500 more than a year ago (15% increase). Since 2005, Polish universities have consistently increased their numbers. Foreign students currently make up 4.88% of the total number of students in the country (eight years ago the figure was only 0.61%, in the academic year 2015/2016 - 4.07%). The influence on the growing number of foreigners at Polish universities is, among others, active participation in the "Study in Poland" program, other activities at the central level and marketing activities of universities. 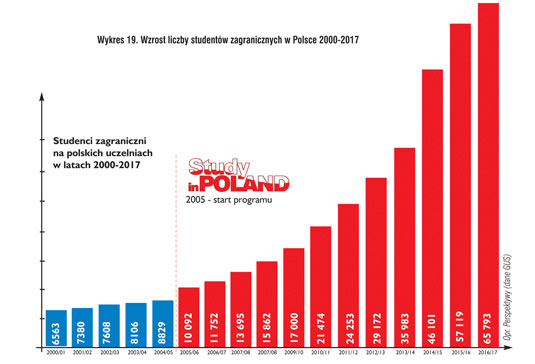 There has been a slight increase in the internationalization ratio in the academic year 2016/17. It amounted to over 4,88% (4,07% is the previous year). This is due to the fact that more and more foreign students are studying at Polish universities as well as a decrease in the total number of students in Poland. In the academic year 2016/17, there were 1 348 822 students in Poland - over 56k less than in the previous year.

For the past few years the dominant group in Polish universities has been students from Ukraine and Belarus. In the academic year 2016/17, 35 584 Ukrainians and 5119 Belarussians were studying in Poland. This is another increase in the number of students from these countries. This is due, among other things, from a similar culture, close neighborhood and Poland's belonging to the EU. However, wide offer, a wide range of courses and programs as well as a high level of teaching is the most important for them.

High quality of education is a criterion that is also important for other nationalities that decide to study in our country. In the analysed/year there was a huge increase in students from India, who currently rank third in terms of number of students studying in Poland (2138). A large group of students are students from Scandinavia - Norwegians (1531) and Swedes (1242). Scandinavians most often choose medical schools. More and more students from Spain (1607), Turkey (1471), Czech Republic (1061) and Russia (1055) come to Poland.

The number of students from Asia increased, for example from India (2138), Saudi Arabia (871), Taiwan (758). Polish universities pay more and more attention to Chineese education market. Every year thousands of young people from this country go to study abroad. Poland has only 953 visitors, but there is a growing trend (compared with 107 in the previous year). There is also a growing number of students from Malaysia (185), Azerbaijan (281), Uzbekistan (280), Tajikistan (166) and Bangladesh (160). However, students from Europe continue to be the main group studying at Polish universities. This situation requires increased promotional activity and an interesting educational offer on non-European markets, especially in Asia.

A rapid upward trend is observed, as far as students from India are concerned. Compared to the academic year 2015/2016, there was an increase of 2.38 times more. Young Hindi are increasingly interested in Polish universities. A rapidly growing population in India and at the same time too few places in Indian higher education institutions make them more and more considering studying abroad, including in Poland.

Another future market for Polish universities is Kazakhstan. In Poland there are currently 674 students from this country. Kazakhstan attaches great importance to education. They are looking for new opportunities for study abroad or for student exchange. Their country is growing at a rapid pace, and this in turn is associated with the hope of gaining the most educated managers. Therefore, the Kazakh authorities offer scholarships to the best students to study abroad. This gives our universities the chance to attract more students from Kazakhstan.

In the world over 4.6 million students study outside their own countries. According to the prognoses, by 2020 this number will double. Over a half of international students come from Asia (the majority from China, India and Korea). Most foreign students study in the OECD countries including USA, Australia, UK, Germany and France. These „great five” host over a half of all the international students in the world. Recently 7% of them travelled to China.

Despite the spectacular growth, there is still fewer percentage of foreign students studying in Poland in comparison to the most developed Western countries or in China, and also in comparison with our neighbours: Czech Republic, Hungary, Slovakia, Lithuania. Poland is next to Spain and Slovenia, the least internationalised EU country and one of the least internationalised in the OECD.